Just as his career is about to take off, Nicola, a food performer and TV-host from Puglia, receives a shocking cancer diagnosis. When his chef friends offer to cook for him the foods he wishes, but which he cannot eat during treatment, between a parmigiana and a panzerotto, he begins in the film Alla Salute, by Brunella Filì, a typically Italian quest for happiness. 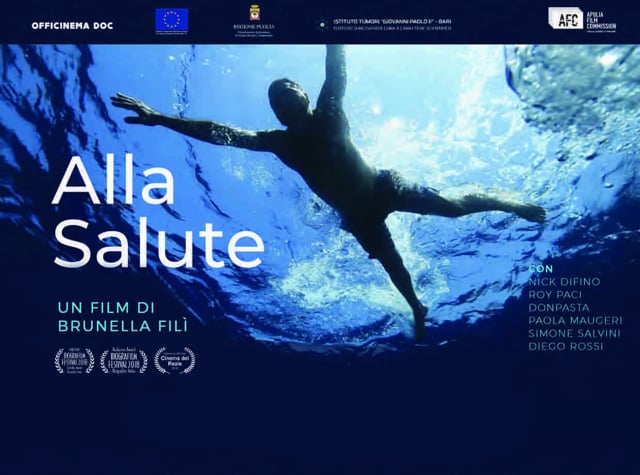 Brunella Filì is a young director and producer born in Puglia.
You founded, in 2013, the production company OFFICINEMA DOC (www.officinemadoc.com) thanks to
victory of the Active Principles call, together with its members. You have written and directed two feature films, which have won multiple awards at festivals and distributed all over the world.

The first film, “Emergency Exit – young Italians abroad” – screened in the European Parliament – is visible in streaming on Amazon Prime Video, after being chosen by Netflix for its Italian catalog and having won numerous awards, including Best Film at Madrid Film Festival, Libero Bizzarri Award, Best Doc Award at the Social World Film Festival, European Film Festival and others). From the film, a 5-episode web series was also taken, with new stories of young Italian emigrants, visible here: http://www.emergencyexit.it/series.html

Between 2020 and 2021 you directed the first season of “Guess who comes to the scene”, the on demand format of the Teatro Pubblico Pugliese.

His second film, “Alla Salute”, which tells a possible recipe for happiness despite illness, shot in Puglia, is now aired on Sky On Demand and Sky Go, after the exclusive release on LaEffe and after having collected prizes in the most important festivals (Biografilm, Hotdocs, Thessaloniki, Houston, etc.) and screenings in Europe, Asia and the USA.
Brunella teaches Documentary Cinema at the Ca ‘Foscari University of Venice and is a member of the jury in some international festivals.
Today she works, with her team, on the development of the third feature film “Sea Sisters”, which will focus on women’s emancipation and gender equality.