CARNE is about how women are seen as bodies at disposal, judged as time passes as meat cooking stages. Through the form and texture of real materials such as paint, watercolor, clay, 35mm film and virtual image decomposition as glitches and datamosh, five women are represented in animation by women animators to highlight the perverse way in which society looks at them. 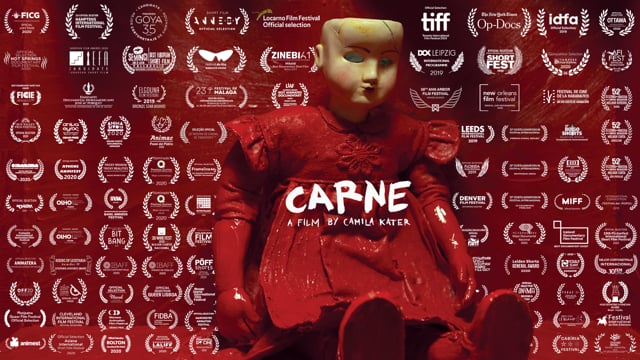 Camila Kater is a director, animator and production designer. Bachelor of Medialogy and Film and Television Production by Anglia Ruskin University (Cambridge, UK). She served in stop-motion productions as animator, art director and puppet maker in Apple The Trial (2013), Flirt(2015), Indescrivibile (being finalized); and as an art and animation assistant on the feature film “Bob Cuspe, we do not likepeople” (in production) from Coala Filmes.Her first shortfilm FLESH co-produced by Abano (Spain) and Doctela (Brazil) has been selected for the development oflaboratory Bridging The Gap Animation Lab MiradasDoc (Tenerife, Spain).C. Kater is a member of Campinas Animation Film Center and co-founder / coordinator of the slug (La Extraordinary WeekShows Animated) who completed three editions at Unicamp, with the support of festivals like MONSTRA (Lisbon AnimatedFilm Festival), ANIMAGE (Festival International of Animation of Pernambuco) and StopTrik International Festival (Sloveniaand Poland).