My mother married my father ́s photograph in Tehran. He was studying radiology in Switzerland, and for my mother to come and live with him, marriage was obligatory. For my mother, with her religious background, living in Europe was a challenge. Sin was everywhere. My father came from a liberal and secular family. He was a lover of culture, fine arts, classical music. My mother never understood how he for example could treasure a painting depicting nude bodies.

After I was born, we moved from Switzerland back to Tehran. Shortly after, the Revolution happened and changed everything upside down. My mother found a new identity, an important space for herself: She became a religious activist, school principal, and did military training. My father sat quietly in his favorite chair at home and listened to Bach. In our house, there was no more card playing or red wine. My mother ́s prayer mat, and my prayer mat, were placed next to each other in the living room, by the window.

Photographs of women without hijab were ripped apart. My mother censored the past – while my father dreamt of a different future.

I was torn between my two parents. Our family was split. For a little girl, it was difficult and painful. As my identity developed, I carried both of them inside me. I still do, to this day. I am the result of Iran ́s struggle between tradition and modernization.

My story is told through photographs, archive footage, letters and voices. Our home in Tehran becomes a metaphor of the shifts in our family, hence in modern Iranian society. 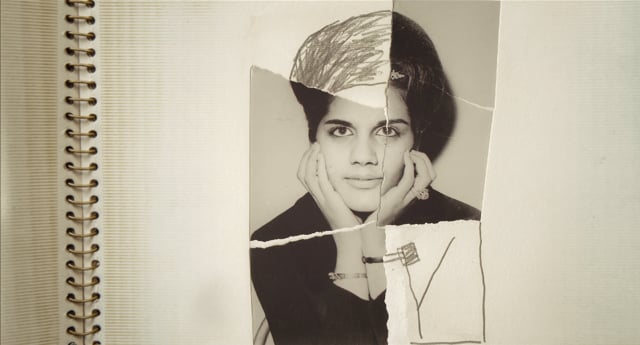 Firouzeh Khosrovani. Born in Tehran, Firouzeh Khosrovani settled in Italy to pursue her artistic studies at the Accademia di Belle Arti di Brera. After graduating in 2002 she returned to Iran and acquired her Master’s degree in Journalism. She now lives between Tehran and Rome. Her debut film, Life Train (2004), is a documentary on the ‘play’ therapy provided for the traumatized children of the eartquake in Bam.

In 2007, she directed Rough Cut, a film about mutilated plastic mannequins in the shop windows of Tehran, which won 13 international film festival awards. Her last work, Fest of Duty, follows two adolescent girls as they transition into adulthood, eight years after their official Fest of Duty. The film won the OXFAM award at IDFA in 2014.